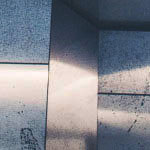 Melbourne-based architecture firm Minifie van Schaik (MvS) and iPartnership of Kuala Lumpur (led by RMIT grad, Indra Ramanathan) have teamed for a number of recent projects in Malaysia, and make an interesting case study in cross-border cooperation. As Indra and Jan van Shaik discussed in a recent interview for this newsletter, their association is strong because it is based on a common design language learned at university in Australia, and the trust this easy communication brings.

As directors of quite different practices (Indra’s founded on interior work and Jan’s on conceptual and customised buildings), they saw collaborative opportunities in the Malaysian market where design is efficient but perhaps lacking in flair, a situation described as ‘building concrete spreadsheets’. Early projects involved a fairly typical split, with the Melbourne firm doing design and KL handling documentation and client communication. The model has now evolved with the MvS directors visiting Malaysia regularly to review and critique design work being produced in KL; building capability through productive and essential feedback not necessarily available internally or locally.

The alliance is now working through its fourth or fifth project, with two built, for Alice Smith School. iPartnership master-planned Alice Smith’s Jalan Bellamy campus but felt that to realise its potential architecturally, a deeper level of critical thinking was required. MvS and iPartnership bid jointly for the primary school gateway building and worked closely with a parent-led board of governors to deliver an agile, adaptable and inspiring building. A building for the secondary campus nears completion.

The mixed use ‘Datum Regalia’ project for a government developer was won in a competition managed by Lend Lease. As is typical of this procurement method in south-east Asia, a fully ‘resolved’ design was required within weeks. The team instead proposed a methodology, and was successful against a field of 18 practices.

Another master-planning project, for the Malaysian Rubber Board (Lembaga Getah Malaysia), has been parlayed into a commission for the HQ building. Design of the Hevea Tower was a challenge of external communication as the language of architecture was not shared by the clients. Finance, management and research teams had to be aligned using a clear concept described in terms they could understand. The metaphor of the rubber tree, with abstractions of its form, growth and texture, was comprehensible to all with a ‘rubber collecting bucket’ entry canopy providing an architecturally satisfying nod to Oscar Niemeyer. The project proceeds to tender in two months.

Jan van Shaik RAIA, will be speaking Datum:KL, the largest architectural forum in SEAsia, between August 12th and 15th