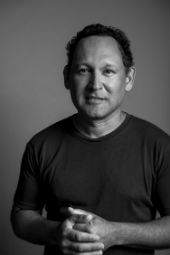 A house is something we own, a home something we belong to. It is therefore reasonable to argue that what we belong to constitutes much more than bricks and mortar. Indeed, as citizens of the Commonwealth of Australia the question that remains unanswered is how can homelessness exist in our own nation?

In examining this question, it is possible to elicit a broader understanding of home through the lens of Country. Here, Country is described as a complete synthesised system between ourselves, the land, what we build and the way we sustain the things that matter. Kevin’s talk will be followed by a panel on Indigenous Housing.

Kevin O’Brien is a descendent of the Kaurereg and Meriam people of Far North Queensland, and a Brisbane based architect. In 2017 he was appointed Professor of Creative Practice at the School of Architecture, Design and Planning at the University of Sydney, and in 2018 he joined BVN as a Principal.

With a career spanning ten years each in IT and Community Services, Rebecca Wessels now combines her skills and experiences from both industries to support her clients in her own successful branding and design business. She has a passion for the preservation of language and culture including her own Peramangk and Ngarrindjeri Aboriginal heritage.

Frank Wangutya Wanganeen is a Kaurna / Nurungga Man who was raised on Point Pearce Mission on the Yorke Peninsula of South Australia.  He is passionate about Reconciliation and has been on involved in various committees that deal with Reconciliation.

Frank is the 2017 recipient of the Premier`s NAIDOC Award which he received for his contribution and ongoing work in the area of the revival of the Kaurna Language, Aboriginal Heritage, Native Title, and community engagement.

Michael commenced private practice in Adelaide in 1992, with Susan Phillips. He develops ‘place-specific’, and ESD-based design outcomes, many in regional SA and Victoria, across all types of mainly public work: schools, libraries, universities, galleries, civic projects, indigenous, social housing and master plans. Michael is ambitious for a strongly less-elitist profession, one that is more integrated with building and community and one that can offer its services to all sectors of society, in order to shape a better future for all. The practice has received over 50 awards, including co-receipt with Susan, of the SA President’s Medal in 2014.